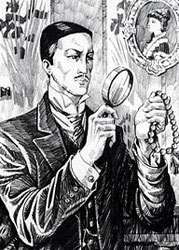 Erast Fandorin is the eponymous protagonist of a highly popular Russian Historical Detective Fiction series set in the 19th century. He starts off as a regular police clerk in Moscow in 1876 and eventually becomes a Great Detective of international renown, on one occasion employed even by the Tsar himself. Early in his career, he exiles himself to Japan, learns the ways of the ninjas, and returns even more badass than before. Later in his life, he becomes a technology geek (while retaining his badassitude, of course) with a special fondness for Cool Cars.

The books were written by Boris Akunin (his real name is Grigory Shalvovich Chkhartishvili but it's too difficult to pronounce) and noted for their eloquent writing style, remarkable characters, intelligent mysteries, and countless references to Russian history and literature. Every book in the series belongs to a different subgenre of detective mystery (Government Conspiracy, Spy Drama, Professional Killer mystery, etc.). English translations were published for every novel except the two story collections, Jade Rosary Beads (Fandorin #11) and Planet Water (Fandorin #14); those were skipped.

The series began in 1998 with Azazel/The Winter Queen and concluded, per the Word of God, in 2018 with Not Saying Goodbye. A full list of published novels can be found on the Recap page.

See also Sister Pelagia, for the other detective series by Boris Akunin known to the English reader.

Fandorin novels with their own work pages:

Tropes found in other books and general Fandorin tropes: