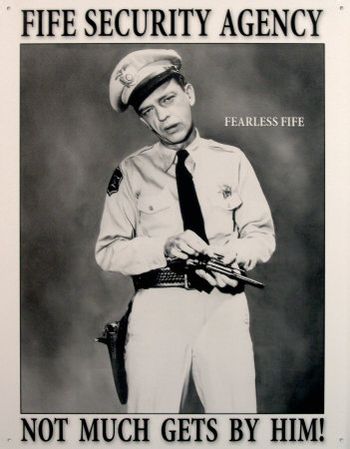 Sheriffs and marshals often have deputies to assist them. In order to explain how this person isn't the sheriff or marshal, the writers will often make the character clueless.

In its benign form, this just makes the Clueless Deputy The Watson for their boss, or the protagonist detective. But it can rapidly slide downhill until the deputy acts like an idiot. Generally, the deputy has some redeeming qualities, such as incorruptibility, shooting skills or at least the willingness to serve in a dangerous job for low pay, but if the sheriff is a Corrupt Hick, the clueless deputy may simply be a relative who needed a job.

The clueless deputy can be counted upon if the writer needs a The Guards Must Be Crazy moment to justify the heroes getting out of jail, or to act as an Obstructive Bureaucrat to keep information that could resolve the plot from reaching the sheriff.

On rare occasions, the clueless deputy of a Corrupt Hick sheriff is unaware of their superior's criminal activities, and when incontrovertible evidence is presented, will arrest the crook to preserve law and order in the county.