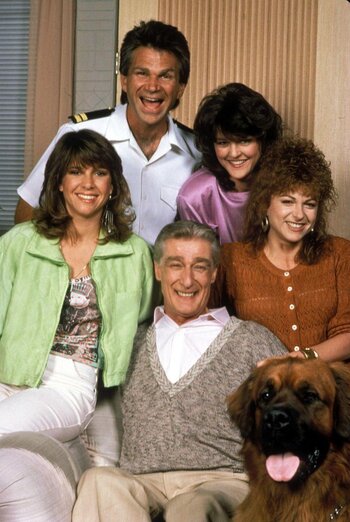 Empty Nest was an NBC sitcom which ran from 1988 to 1995. The series began as a spin-off of The Golden Girls, and its pilot ran as an episode of that show (season 2, episode 26), although it was dramatically changed before becoming its own series. Nevertheless, the two households were established as neighbors and characters regularly crossed between the two. Empty Nest was one of the year's top 10 most-watched programs for its first three years.

The show centered around Dr. Harry Weston (Richard Mulligan), a Miami pediatrician. When Harry's wife passes away, his two adult daughters, neurotic divorcee Carol (Dinah Manoff) and tough party-girl policewoman Barbara (Kristy McNichol) move back in with Harry to help support him. A third daughter was mentioned as being away at college, but was not seen until 1992 - when McNichol left the series due to suffering from bipolar disorder, Emily (Lisa Rieffel) was introduced to the cast for one season. Rounding out the cast was the Westons' wacky, womanizing neighbor Charlie Dietz (David Leisure), Harry's tough Southern nurse Laverne Todd (Park Overall), and Dreyfuss the dog. Estelle Getty also reprised her role as Sophia Patrillo from The Golden Girls and Golden Palace, including as a regular cast member in the final two seasons after Golden Palace ended. Another plot point that occurred around the time the final two seasons began was that Harry and Laverne left the hospital where they initially worked at to work for a struggling inner-city medical clinic run by the tough-talking Dr. Maxine Douglas (Marsha Warfield).

Episodes generally centered around the relationship between Harry and his daughters, who were highly competitive for 'Daddy's' attention. Harry's career as a children's doctor was also a major focus. The series ran for seven seasons and spawned its own spin-off, Nurses, which revolved around a group of nurses who also worked at the hospital where Harry worked. The show was a big hit in its early run, finishing in the Top 10 for each of its first three seasons, and won Mulligan his second Emmy for Outstanding Lead Actor in a Comedy Series.note  Mulligan is the only person to win in that category for his role in two different series; the first was for Burt Campbell in another Susan Harris series, Soap. He won for his performance in the first season; this would be the only Emmy the show would ever receive. However, ratings declined after several cast changes and the loss of The Golden Girls as a lead-in, and the series ended in 1995.