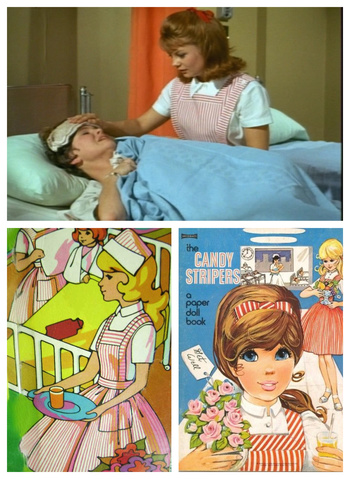 Cissy on duty in Family Affair, Barbie's Cousin Francie, and a Paper Doll Book from the 1970's
Advertisement:

Hey! Why's that nurse wearing a snazzy striped outfit instead of a white uniform with a red cross? Chances are she's not a nurse, but a hospital volunteer known as a Candy Striper.

In real life, in the United States, the Candy Stripers were a group of young, majority-female hospital volunteers whose name was derived from the distinctive striped uniforms they wore to differentiate them from nurses proper. The red-and-white stripes of the fabric resembled a candy cane, hence the moniker "Candy Stripe." The term eventually became a generic name for any hospital volunteer, not just the ones who wore the cutesy uniform. The actual Candy Stripers performed various tasks around the hospital; from assisting with administrative duties, to helming the gift shop, to visiting with patients. In fictionland, Candy Stripers are Always Female Hospital Hotties who generally fall into one of two groups, depending on the target audience:

The term "Candy Striper" has largely drifted out of common parlance in the 21st century, as the use of untrained minors as unpaid labor in the health care sector has decreased. As such, it's rare to see this trope played straight (or used at all) in media produced during the 21st century. Most uses of this trope date to the 1950s-1970s, with a few instances cropping up in the '80s and '90s. The legacy of this trope can be seen in striped nurse uniforms that appear from time to time in modern media, hearkening back to the distinctive peppermint garb of the Candy Stripers.