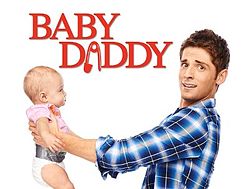 Baby Daddy is an ABC Family television series about Ben Wheeler, a 20-something bartender who is trying to raise his baby daughter Emma while maintaining his bachelor lifestyle. The twist is that Ben didn't realise he was a father until Emma was left outside his apartment door by a one-night-stand. While Ben initially decides to put Emma up for adoption, something that the birth mother also agrees with, he ends up bonding with his daughter and decides to raise her himself.
Advertisement:

Ben is helped by his older brother Danny, his best friend Tucker, his childhood friend Riley and his overbearing mother Bonnie.