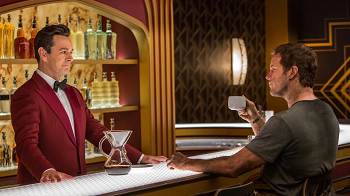 "What’ll it be for you, good sir?"
"I'm Guinan. I tend bar and I listen."
— Guinan, Star Trek: The Next Generation
Advertisement:

Working in a bar is never easy (as any Real Life bartender can attest). You have to deal with lowlifes, drunks, soldiers who will harass the female entertainment and some of the clientele with their better armed arsenal, and the average Joe who confesses his life problems to you as you pour him another round. (And don't ask about the Bar Brawl!) This is the life of the Bartender: he pours a round and just quietly listens and observes the setting.

Unless, of course, he's asked for advice. Just how valuable this advice might be depends on the story, but when you're desperate and maybe a bit drunk, it might seem like a good idea. Expect him to hear "I'll Tell You When I've Had Enough!" pretty often. The real weirdos will be the ones who get Drunk on Milk.

Depending on the setting, this character may also be a Knowledge Broker, as alcohol tends to loosen lips. They may take up the duty of a quest givers in any fantasy (or science-fantasy)-themed Tabletop Game.

Many bartenders are known only by their nickname. Also often afflicted with Obsessive-Compulsive Barkeeping.