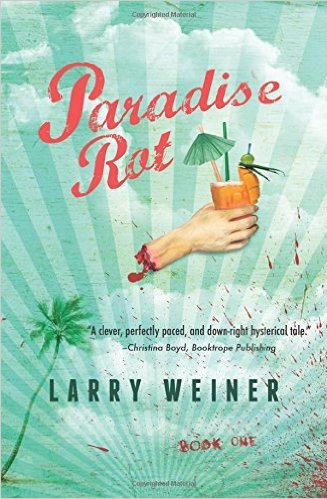 Looks like a fun holiday!
"A separate ethical distinction can be made between killing a human for food (homicidal cannibalism) and eating the flesh of a person who was already dead (nacre-cannibalism)."
— From Wikipedia, the free encyclopedia
"As God is my witness, I'll never be hungry again."
— Scarlett O'Hara
"I'm gonna need to puke."
— Kyle Brightman
Advertisement:

Paradise Rot is a novel by Larry Weiner, published in 2014 as the first in the Island Trilogy.

Due to a litany of causes, advertising man Kyle Brightman snaps mentally when a pair of elderly women block the supermarket aisle and starts attacking them, complete with egg throwing, mace, and tasers. This causes him to be sent to the St. Eligius Pych Ward, 5th Floor, where he meets the Rambo-esque Oscar Pilson. During his recovery, Kyle is given the advice to take a job in the Caribbean, specifically the Island of St. Agrippina, which is in much need of an ad man.

When he is released, he takes the job and journeys to the Island, where he meets his partner and copywriter, Cate Hendrickson, during the recovery from the booze filled flight over. The next day he discovers that he and Cate basically have carte blanche on how to design the island's advertising campaign. And also that ninety percent of the other hotel staff are zombies. And that there's a crazy survivalist woman out there killing them. And that the whole hotel is a literal tourist trap. After that, things get a little hairy...

Followed by Once Again With Blood.