Literature / Once Again With Blood 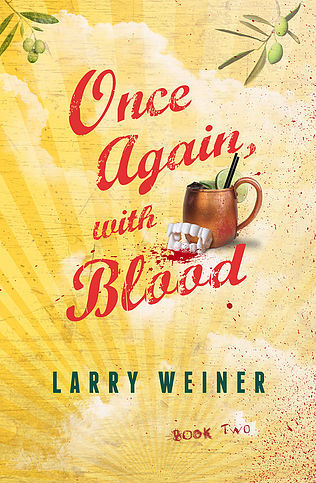 Come for the beaches, stay for the Vampires.
"We're getting the band back together!"
— Kyle Brightman
Advertisement:

Once Again With Blood is a novel by Larry Weiner, published in 2014 as the second in the Island Trilogy.

Our Story once again begins with Kyle Brightman in the midst of a psychotic break, except this time he's explaining to a newbie orderly exactly what's up. After a bit of finagling on the part of Cate Hendrickson, he agrees to come back to work for Dory Parthenia on her new island, St. Ledo, setting up an ad campaign to rival the one on St. Agrippina.

Kyle is naturally suspicious of this, since it rings of the last time things went south on an island with supernatural elements on it, but is persuaded anyway, mostly because he's experiencing a bit of PTSD from the last island resort. At first it seems alright, but then he gets suspicious when he learns that the sponsors for the hotel don't drink...Vine...