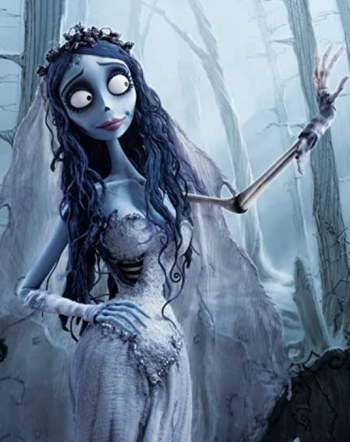 Here comes the bride... it’s too bad she died.
Zoe: [to Dirge] So... if she's a zombie, too... why does she look so... you know? And you look so, well...
Nephthys: Men always let themselves go, sweetheart. Even the dead ones.
— Xombie
Advertisement:

Like ghosts and vampires who were only recently romanticised and portrayed as humanlike in many aspects, zombies were traditionally depicted as horrifying, creepy, ugly, mindless and carnivorous. The reason for this lies in the concept of zombie originating from Caribbean voodoo, in which they were corpses reanimated by a magician and subjected to his will, devoid of their own will and personality.

However, since the late 1990s zombies have increasingly been seen as not so much different from humans, and even as sexual figures. Nowadays, the depiction of a zombie as sentient, humane and seeking equality with humans is a frequent metaphor for real-life discriminated groups and for the de-objectification of them; to amplify the effect, he or she may be portrayed as physically attractive and sometimes even in a romantic relationship with a human. Another source of this trope is the old legends and Gothic fantasies about undead beauties, which have been reimagined in the light of modern zombie lore.

Such a character may have nonconformist and taboo-breaking overtones (sometimes sexually nonconformist), since zombies are seen as subject to wild desires and free of social conventions. Their attitude to their undead status may vary: some of them dream of becoming human or of resting in peace, while others are perfectly happy being the way they are, and find advantages in it (sometimes they would even refuse to become living humans again when given such a possibility).

Most of these characters discard the conventions of zombie lore settled by George Romero (since eating flesh and brains is just somehow... unsexy), instead appealing to older undead archetypes, like Voodoo Zombies, Revenant Zombies, and the aforementioned undead beauties from Gothic-era stories. In the most general sense, "zombie" may apply to any living dead creature that is not incorporeal, does not drink blood, and is not wrapped in bandages.

This trope only applies when the said zombie is described as attractive and/or as a romantic interest to humans in-universe.

For more examples of this trope, check out a thematic page