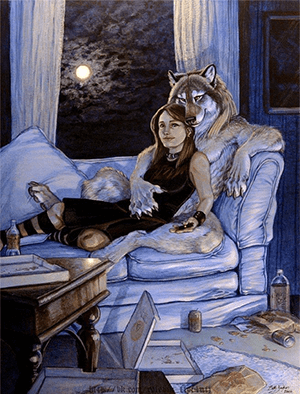 An increasingly common phenomenon where mythical creatures traditionally feared and shunned, especially such horror staples as vampires, werewolves and demons, somehow become the targets of sexual desire. It's like All Girls Want Bad Boys taken to absurd levels.

Positive attributes of these creatures will often be exaggerated, if not fabricated out of whole cloth, and negative aspects will be reduced or removed entirely. Yet often as not, these now romantically inclined monsters will retain their definitive characteristics—such as the fact that they must prey on humans to survive, derive power from suffering, or are just plain evil.

Most often this is seen in erotic romance novels, or their counterparts in other media. The main character will be an ordinary woman, the better for the reader to relate to her, and the love interest may be anything from an ordinary man with a monstrous curse to a ravenous werewolf, bloodthirsty vampire or even a cruel and inhumane demon. At first, said monster will regard the woman as either a nuisance or an actual prey item, but through The Power of Love, she will persevere and manage to transform him into a Bowdlerised version of the source myth, perhaps retaining some rough edges but otherwise a relatively decent being.

This can create some interesting story possibilities if done well, both in such a creature having an inherently contradictory nature and in how the creature and his lover deal with said contradiction, particularly in how they do or do not come to a better understanding and balance and whether the creature can fight his inner nature/become a better person while still retaining what their lover finds sexy about them. (I.e., Rule of Drama.) If done poorly, however, the result can be either a lot of Wangst or a very dark case of Values Dissonance, Protagonist-Centered Morality, and Moral Myopia.

This phenomenon has been around, especially applying to vampires, for quite a long time, making this Older Than They Think for people assuming this to be only a recent phenomenon. For instance, with the recent popularization of the fact that North American wolves are usually not that aggressive to humans and are loving parents, then it stands to reason that werewolves can be seen as attractive company to have. Also, considering some particular forms of mythology such as Horny Devils and the number of god/mortal pairings in Classical mythology, this attraction to the exotically dangerous may simply be an endemic part of human thought, reflected in stories throughout history.

This is particularly common in Romantic and Gothic literature. As Victorian England was a sexually repressed society, writers would often link sexuality with the dark and forbidden. Creating metaphorically sexual monsters was also a way of Getting Crap Past the Radar.

Double Standards may apply, as this seems to happen mainly with human women and masculine beasties. On the other hand, see Cute Monster Girl.

If you're looking for the movie of the same name, see here.