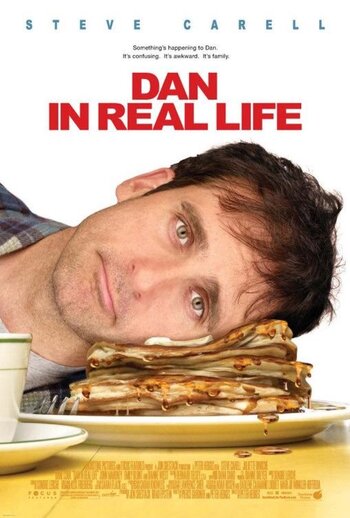 Dan in Real Life is a 2007 comedy-drama film directed and co-written by Peter Hedges and starring Steve Carell in the title role, with a supporting cast including Juliette Binoche, Dane Cook, John Mahoney, Emily Blunt, and Dianne Wiest.

Dan Burns is a newspaper advice columnist and a widower struggling to raise three headstrong daughters. The four of them are preparing to drive from suburban New Jersey to coastal Rhode Island for the annual Burns family get-together. Dan manages to anger each of his daughters in turn over the course of the preparations and the long drive. The morning after the little family arrives at Dan's parents' house, Dan's mother sends him into town so his daughters can have some space. While in town, Dan meets a woman named Marie. The two of them hit it off immediately and talk for a long time, until Marie gets a phone call and realizes she's almost late to go meet her new boyfriend's family.

Once back at the house, Dan mentions to his brother Mitch that he "met somebody," at which point Mitch introduces Dan to his new girlfriend... who turns out to be Marie. Dan now has to keep his attraction to Marie a secret, and over the next three family-activity-filled days, awkwardness ensues, along with some hilarity.