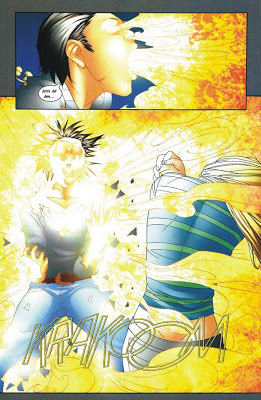 Topher learns why it is a bad idea for a vampire to snack on a girl with solar-powered blood.
"I was actually at Woodstock. That was a weird gig. I fed off a flower person and I spent the next six hours watching my hand move."
— Spike, Buffy the Vampire Slayer

Vampires may have their differences across media, but most of them have something in common: they drink blood. They drink blood from humans (or whatever species they once were) usually. So, what happens when they feed off of someone with drugs, alcohol, or poison in their system?

Why, they get high, drunk, or poisoned of course.

This can be Played for Laughs (unless it's poison) since stoners and drunks are funny when they make fools of themselves. This is also the only logical way for vampires to get intoxicated since their diet mainly consists of blood.

In extreme cases, the vampire might actually get addicted to the tainted blood and deliberately seek out drug users or drunks.

As an extension, this can also apply to those who feed on humans, but aren't vampires. See Emotion Eater or To Serve Man for example. The latter overlaps with Assimilation Backfire.

Compare and contrast Too Spicy for Yog-Sothoth and Supernaturally Delicious and Nutritious. And no, this isn't about using blood with spikes as a weapon.