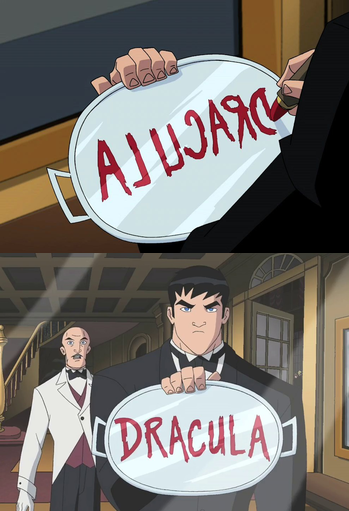 World's Greatest Detective right here.
Anderson: Time the fuck out. If we're doing this — and we are doing this — I'm not gonna come swinging at Dracula. I'm killing Alucard!
Dracula: ... you do know that it's just my name spelled backward—
Anderson: Of course I do! Shut up and bring him out!
— Hellsing Ultimate Abridged
Advertisement:

A Sdrawkcab Name commonly used by vampires that is definitely a Name to Run Away from Really Fast. It is also something of a Shout-Out to arguably the most famous vampire of all time.

Compare and contrast Louis Cypher where other dark creatures use similarly witty aliases and Hugh Mann where the creature posing as human also has a Paper-Thin Disguise. Related to Most Definitely Not a Villain and, on the other side, tropes like Steven Ulysses Perhero.