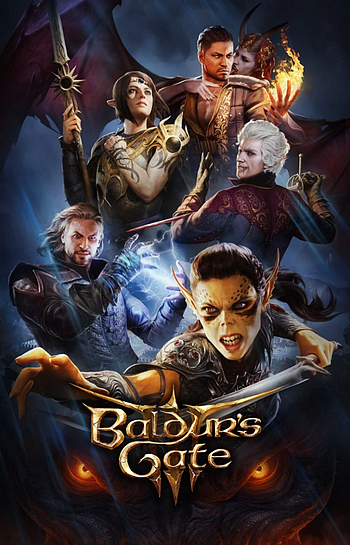 Resist, and turn darkness against itself. Or embrace corruption, and become ultimate evil. note Clockwise, from bottom right: Lae'zel, Gale, Shadowheart, Wyll (and Mizora), and Astarion.
"Consider your predicament. One skull, two tenants, and no solution in sight. I could fix it all like that [...] Try to cure yourself. Shop around - beg, borrow and steal. Exhaust every possibility until none are left. And when hope has whittled down to the very marrow of despair - that's when you'll come knocking on my door."
— Raphael
Advertisement:

Baldur's Gate III is a Western Role-Playing Game which serves as the third main installment in the Baldur's Gate series, set in the High Fantasy Dungeons & Dragons setting Forgotten Realms. It is developed by Larian Studios, best known for the acclaimed Divinity: Original Sin duology, for the PC and Google Stadia. For the first time in the series, the game adapts the current 5th Edition ruleset of the tabletop game, as well as Turn-Based Combat. The game entered Early Access on October 6, 2020, and is set to be fully released in 2023.

Set in 1492 DR (over a hundred years after the events of the previous installments), the story follows the events of an illithid invasion into Toril. The Player Character is one of the unlucky souls captured by the mind flayers, and is implanted with an illithid tadpole that will slowly turn them into a mind flayer unless it is removed. After escaping from captivity and crashing the nautiloid ship they were being transported on, they team up with several other survivors of the crash to search for a way to remove the parasite before the ceremorphosis is complete.

In preparation for the game's formal announcement, a 5th Edition adventure module was announced titled Baldur's Gate: Descent into Avernus, which takes place around a century after Baldur's Gate II, and acts as a prologue of sorts for this game. It was released on September 17, 2019, and helps bridge some of the gaps between the two games. In July 2021, Jim Zub (writer of the comic book spin-off series Legends of Baldur's Gate) announced that he is working on a comic mini-series titled Dungeons & Dragons: Mindbreaker, with the first issue released in October 2021. Serving as a prequel to the game, the comic series focuses on a group of adventurers, which includes Minsc and Boo, as they fight to save each other, and their sanity, from a mind flayer-led cult secretly destroying trust between the factions in Baldur’s Gate.