Tabletop Game / Out of the Abyss 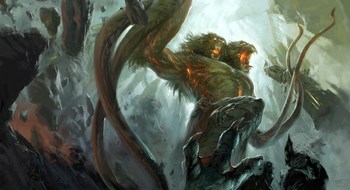 Madness is the only escape.
Out of the Abyss is an adventure module for the fifth edition of Dungeons & Dragons, released on September 15, 2015. It was part of a multi-media storyline called Rage of Demons, which includes supplementary books by R.A. Salvatore and a video game called Sword Coast Legends. The adventure itself is seen as a Spiritual Successor to the classic D-series of modules, part of the famous Queen of the Spiders series.
Advertisement:

The adventure starts out in a prison at a drow outpost in the Underdark. But escaping their elven captors is merely the first trial that the adventurers must face. Demons now roam through the northern Underdark, spreading their madness as they go and twisting the land to suit their whims. Pursued by both the drow and hungry fiends, can the adventurers escape to the surface with their sanity intact?

DISCLAIMER: Before you take on demon lords, consult a physician. Do not drink alcohol while taking on demon lords. Taking alcohol and demon lords may increase your risk of death. Other side effects may include hallucinations, mindless rage, gluttony, greed, paranoia, self-delusion, bestial urges, nihilism, hedonism, megalomania, a messiah complex, cannibalism, multiple personalities, and homicidal psychosis.