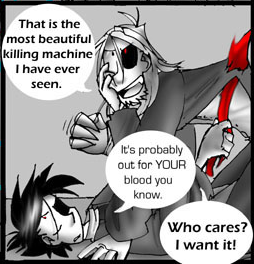 Captain Snow sure has his priorities straight.
"The perfect organism. Its structural perfection is matched only by its hostility. I admire its purity. A survivor, unclouded by conscience, remorse, or delusions of morality."
— Ash from Alien, describing the Xenomorph
Advertisement:

Most of the time, whenever a person encounters a creature that could kill them with ease, they're usually terrified and fearing for their life.

Of course, the fanboy trance usually lasts a moment before they remember that what they're geeking out about is, you know, a threat. In more comedic works or works in which It Can Think, they could even graduate to full-fledged Fluffy Tamer and gain a Cool Pet in the creature... or the creature could befriend them alone and continue to be hostile to the rest of their group.

Obviously, while this usually applies to fictional fantasy creatures, this can also apply to more mundane threats (like tornadoes, or sharks).