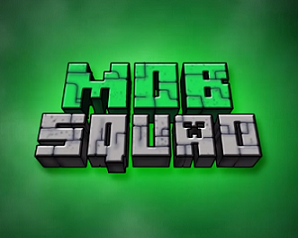 Mob Squad is a web toon by Hank And Jed set in the world of Minecraft.

A new monster has appeared in the forest. It kills animals, builds bizarre structures, and leaves junk everywhere it goes. Fed up, a group of friends from a nearby cave band together to form the Mob Squad, and dedicate themselves to killing the monster.

Two seasons are complete, with a third announced, but with no progress announcements after several years.