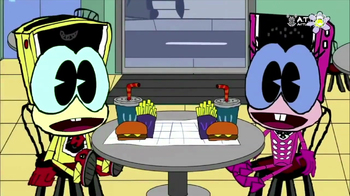 Bulkey and Honey, just two of the many MobéBuds in this series.
MobéBuds, originally known as London Mobile Buddies, is a British-animated web-short series about human-like cell phones in London. Production of episodes stopped somewhere in the 2010's, as the creator of the show now makes speed-drawing videos.