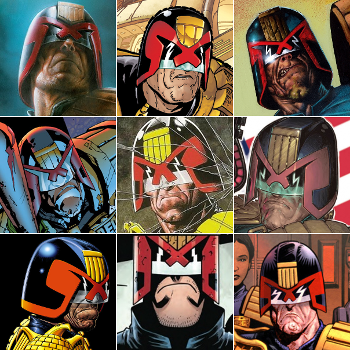 They don't call him "Old Stoneface" for nothing.
"Staying all serious and scowling every minute of the day is impossible! How can anyone look so mad all the time?!"
— Kon regarding Ichigo, Bleach
Advertisement:

A character whose default or most frequent appearance/model is him/her with a serious upside-down smile, even in the most pleasant of situations. Though it can be compared to The Stoic, Perpetual Frowner differs in the simple fact that rather than wearing a face of indifference, the character perpetually expresses the biggest, ugliest frown he or she can make on their face.

Usually comes in three varieties: mopey and listless, angry and angsty, or focused and serious. In many cases, the look of extreme tension continues even when they're asleep. For series where character background and development is allotted, it may later be revealed that the person expresses the demeanor as a result of living or having lived a harsh or tragic life.

Extra points if the character also displays a habit of keeping his arms crossed along with the constant frowning for that extra pouty look.

If the Perpetual Frowner actually does smile, it either signifies that the character has found a reason to be happy and enjoy life again, or it is one of the most potent sources of Nightmare Fuel you will ever come across. The smile may also be forced upon another by someone.

If the expression is not voluntary but the result of damage to nerves or the like, it falls under Frozen Face.

Compare the Aloof Big Brother, the Deadpan Snarker, and The Eeyore. Contrast Perpetual Smiler. See also the Death Glare and the Clint Squint.

She goes at everything with a deadpan expression and monotone delivery. When she smiles, it initially looks completely forced.

She goes at everything with a deadpan expression and monotone delivery. When she smiles, it initially looks completely forced.