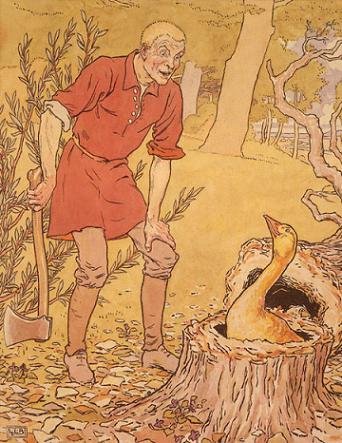 The Golden Goose (German: Die goldene Gans) is a German Fairy Tale collected by The Brothers Grimm and published in their Children and Household's Tales (Kinder- und Hausmärchen) collection. It is the number 64 tale.

A man had three sons, and the youngest -called Dummling- was a fool, and continually abused. One day, the older two sons went to cut wood, and were rude with a little old man who asked to share their food, and both of them cut themselves so badly they had to return home. The youngest asked to go, too, and shared his food. The old man pointed him to a tree to chop down, and he found a goose whose feathers were gold in its roots when he did.

The youngest son took it with him to an inn where he stayed the night. One of the innkeeper's daughters tried to steal a feather, and was stuck to it; her two sisters tried as well, and were stuck to her. The youngest son set out the next day, and the girls had to run to keep up with him. The parson chided them for their antics, and grabbed hold, and then he was stuck as well; the sexton tried to rebuke him, and ended up as well.

Inn the Aarne–Thompson–Uther Index, it is a Type 571 "All Stick Together" and 513B "The Land and Water Ship".

Not to be confused with one of Aesop's Fables, The Goose that Laid the Golden Eggs.