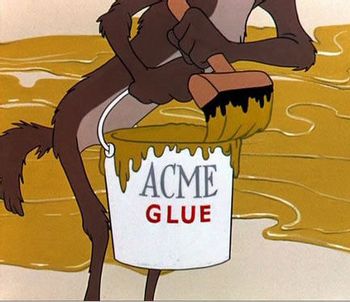 This will not end well.note For Wile E. Coyote.
"Hmmm... tree sap. Very sticky. Better not get on me. Too late."
— Ming-Ming, Wonder Pets!
Advertisement:

A classic Comedy Trope: someone comes in contact with something sticky (honey, flypaper, glue, gum, molasses, tape, tar, wallpaper paste, etc.) and it's Played for Laughs.

If it's not actually superglue, the substance tends to act as a far stronger adhesive than it is in reality. Compare Tongue on the Flagpole, where somebody licks something frozen...

If the character sheds footwear or other clothing to escape, this trope becomes Giving Them the Strip. If two characters get stuck to each other, it becomes a case of Chained Heat. Combine this with Why Am I Ticking? and you get Sticky Bomb. Contrast Slippery Skid, which often has the same setup, but the opposite substances and results. Not to be confused with Sticky Fingers, which has more to do with characters who are kleptomaniacs.

Jane gets stuck not once, but twice in Ninja-Gum.

Jane gets stuck not once, but twice in Ninja-Gum.