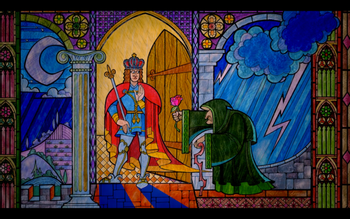 "Please, take this rose in exchange for shelter from the bitter cold!"note He didn't and got himself turned into a beast, and his servants turned into Animate Inanimate Objects. Good going, Adam.
"But then, one winter's night, an old beggar woman came to the castle and offered him a single rose in return for shelter from the bitter cold. Repulsed by her haggard appearance, the Prince sneered at the gift and turned the old woman away. But she warned him not to be deceived by appearances, for Beauty is found within. And when he dismissed her again, the old woman's ugliness melted away to reveal a beautiful Enchantress.

The Prince tried to apologize, but it was too late, for she had seen that there was no love in his heart. And as punishment, she transformed him into a hideous beast, and placed a powerful spell on the castle, and all who lived there."
— The Narrator, Beauty and the Beast
Advertisement:

A typical trope of fairy tales and myths. Old women, wanderers, and wise hooded characters may look like simple peasants, looking for shelter from the (usually) "bad weather conditions" or a hostile environment.

But they're not what they seem to be.

Under their cloak, there's something much, MUCH MORE powerful than you can imagine. They can be members of the Fair Folk, a Physical God, sometimes a Wicked Witch that wants to screw your life with either a spell or a taste of her beauty, or a King Incognito.

In the first two cases, however, these beings in disguise are portrayed as positive characters, whose Fatal Flaw is just an unexpected curiosity towards their hosts (Genre Savvy characters may notice that something's fishy, and it's guaranteed they will never break their hospitality oath). If their staying is excellent, and their innkeepers were smart enough to avoid an Idiot Ball, these beggars will show their true form and thank the hosts for their kindness and selflessness. As reward, they'll give as a present an Ancient Artifact, a Superpower Lottery skill, or, rarely, the hand of one of their children. If not, they will unleash the fury of their wrath.

Expect the puny mortals to remain clueless about their guests' identity, even if their world or oral tradition tells about the very situation they're stuck in. If The Reveal occurs after visits to several homes, there might be a general reward and punishment for those who either helped or rejected them.

Since this is not a trope concerned with the character itself, but with the event caused by their appearance in the work, it acts as a Sub-Trope of Secret Test of Character. It differs from God Was My Copilot and Angel Unaware for the length of their relationship with their innkeepers: in the aforementioned tropes, god-like disguised characters will spend a significant amount of time with the main characters, whereas beggars examples usually begin and end in a single day. Moreover, villains and Well-Intentioned Extremist figures may hide under the cloak of a beggar, averting the positive effects of the other tropes.

Due to the sheer power of these characters, their interactions with the main cast may occur either in a story's prologue or during its climax. In the latter case, The Reveal can also trigger a Plot Twist.

Related to God in Human Form, Beneath the Mask (if they fake their real personality), Secret Identity, God Was My Copilot, Angel Unaware, King Incognito, Honest Axe and, if the beggar turns out to be a Wicked Witch, a Bitch in Sheep's Clothing. If the Secret Test fails, the trope overlaps with Bullying a Dragon and, consequently, Bolt of Divine Retribution, a curse, a Revenge by Proxy or a Fate Worse than Death. Compare Character Witness and Karmic Jackpot. Similar in spirit to Nice to the Waiter, although in that trope the inferior person can be exactly what they seem and it's a third person or the narrative itself approving of the superior person's charity.