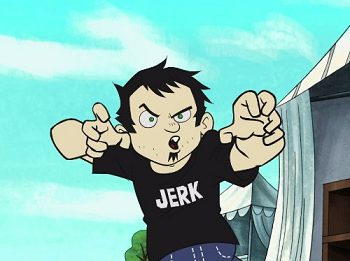 It's even written on the front of his shirt.
Senior sales representative Mark Seversen, already notorious at Aqua-Dek Water Filtration Systems for being an asshole, made the ultimate asshole move Monday when he triumphantly admitted to being an asshole.
"Look, I know you all think I'm an asshole," Seversen, 32, told a roomful of fellow employees. "Well, that may be true, but I moved more units for this company last year than any three of you combined. News flash: Nice guys finish last."
Advertisement:
"So I'm an asshole," Seversen added. "Deal with it."
— The Onion, "Asshole Admits To Being Asshole In Supreme Asshole Move

And then there's this asshole.

The Card-Carrying Jerkass doesn't need to be told that they're a nasty piece of work; they're self-aware enough to know it already. The problem isn't that they're ignorant of their jerkassery, it's that they're proud of it, or at least unrepentant. This character actually considers "being a jerk" a part of their identity and will openly boast it without the slightest hint of shame, seeing no reason to change — or, at least, not caring enough to change. Despite this, the Card-Carrying Jerkass is not incapable of kindness or doing what's right, nor do they necessarily go out of their way to screw other people over.

This trope can be played in a number of different ways. It's mostly used as comic relief, especially in its more exaggerated forms, or used deliberately to make the audience hate a specific character. Exploring this trope can also be used to add nuance or depth to an underdeveloped character: for example, a character may be a Card-Carrying Jerkass because they genuinely believe that everyone is secretly mean and nasty inside, and they're one of the few willing to openly cop to it.

Compare Card-Carrying Villain, who takes a similar attitude towards being evil but isn't necessarily a jerk. For an Internet-specific form of this trope, see the Troll. For a downplayed version of this trope whose motivation is being funny and sees a difference between it and being cruel, see The Gadfly. See also It Amused Me, for characters whose motivation for jerkassery is personal amusement.

This trope is about the jerk's attitude towards their own behavior, not necessarily the nature, frequency, or severity of their dickish deeds. If they do not show any self-awareness towards their jerkish ways, then they're just a plain old Jerkass.