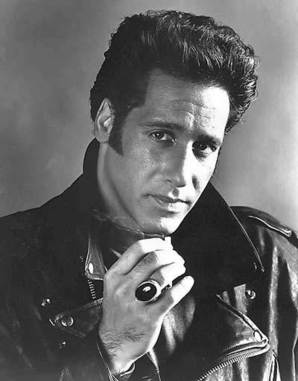 "Up yours, cocksucker!"
Advertisement:

Andrew Clay Silverstein (born September 29, 1957), who goes by the Stage Name Andrew "Dice" Clay, is an insult comedian who was popular in the 1980s and '90s, when he was regarded as the Don Rickles of his generation. Nicknamed "The Diceman", Clay is well known for his combination of Vulgar Humor and Refuge in Audacity that was controversially racist, sexist, homophobic and misogynistic, all done in a thick New York accent with his look resembling Greaser Delinquents. OHHHH!!!

Clay starred in films such as the bomb The Adventures of Ford Fairlane and the stand-up concert film Dice Rules. Later, he tried to soften his image by dropping his "Dice" nickname and appearing in the Short-Runner CBS sitcom Bless This House. After re-adopting his vulgar persona, he Adam Wested as himself on a season of Entourage.

EMF used a sample of him yelling his catchphrase for their hit single "Unbelievable". Ice Cube also sampled one of his punchlines ("Good ol' Mother Goose, remember her?... Yeah, I fucked 'er.") for "Gangsta's Fairytale".