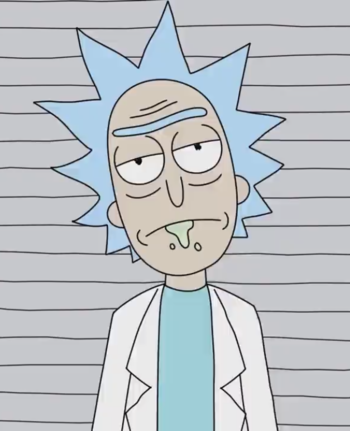 "I'm a scientist; because I invent, transform, create, and destroy for a living, and when I don't like something about the world, I change it."
Advertisement:
"You seem to alternate between viewing your own mind as an unstoppable force and as an inescapable curse. And I think it's because the only truly unapproachable concept for you is that it's your mind within your control. You chose to come here. You chose to talk—to belittle my vocation. Just as you chose to become a pickle. You are the master of your universe, and yet you are dripping with rat blood and feces. Your enormous mind literally vegetating by your own hand. I have no doubt that you would be bored senseless by therapy, the same way I'm bored when I brush my teeth and wipe my ass. Because the thing about repairing, maintaining, and cleaning is, it's not an adventure. There's no way to do it so wrong you might die. It's just work. And the bottom line is some people are okay going to work, and some people... well, some people would rather die. Each of us gets to choose."
— Dr. Wong. Guess what category Rick fits in.
Advertisement:

A jaded, morally-unsound yet brilliant elderly scientist and inventor living with his daughter's family, and Summer and Morty's maternal grandfather. Rick constantly drags his grandchildren and their parents along on adventures that serve purposes rarely expressed. He has access to all sorts of technological marvels he's supposedly invented all on his own, and he is (in)famous among aliens as one of the most intelligent beings in existence. Despite that, he drinks, has a whole suite of more-or-less lowkey mental health issues, and generally isn't the nicest or most pleasant person to be around most of the time, and finds that his inventions are really cut out for bigger problems than found every day in the family, though when the two combine, the result is never a pretty sight.