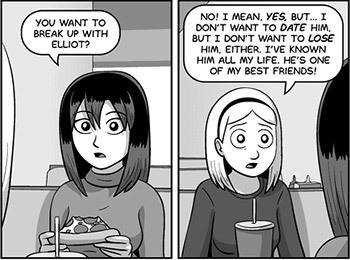 Howard: Wrong thing to say?
Batman: Is it ever the right thing?
— Batman Beyond, "Terry's Friend Dates a Robot"
Advertisement:

A standard breakup line, commonly used in Real Life. One member of a couple suggests to the other that their romantic attachment end and they stay Better as Friends. The listener usually takes this badly (Unlucky Childhood Friend Romance, Entitled to Have You, "friend zone", etc.). The speaker may or may not actually wish to be friends, or indeed ever have contact with their ex again, but wants to spare the other's feelings in any case.

See Just Friends for a type of Romance Arc that this line can be used to end.