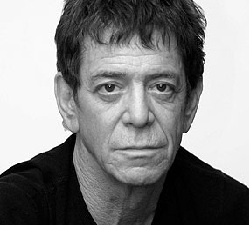 Hey babe, take a walk on the wild side.
"My week beats your year."
Advertisement:

Lewis "Lou" Allan Reed (March 2, 1942 – October 27, 2013) was an American musician and songwriter, known for his work with The Velvet Underground and as a solo artist.

After the VU, Reed faced a largely commercially unsuccessful start to his solo career, before finding a hit with "Walk on the Wild Side" after collaborating with and following the Glam Rock influences of friend David Bowie. Since then, Reed mostly avoided writing songs that would typically be well-received commercially, to varying degrees of success. He explored many styles with his work, perhaps most infamously with the controversial Metal Machine Music. Reed was married to fellow musician Laurie Anderson.

Reed passed away following a liver transplant on October 27, 2013.

"Hey babe, take a walk on the trope side":