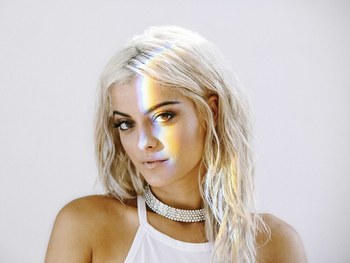 She wants to hear you calling her name like "hey ma-ma-ma".
Advertisement:

Bleta "Bebe" Rexha (born August 30, 1989) is an American-Albanian pop singer born in Brooklyn, NYC. She gained minor recognition for writing Eminem's #1 hit "The Monster" (featuring Rihanna) and would later score a hit in 2014 as a credited vocalist on Cash Cash's EDM single "Take Me Home". However, since the song only peaked at #57, it wasn't seen as her real breakthrough. A year later, she scored a debut Top 40 hit as the chorus-singer on David Guetta's #6 hit "Hey Mama" (which featured rap superstar Nicki Minaj and EDM producer Afrojack). Later on, she would score another hit with a G-Eazy duet titled "Me, Myself & I", which was a success, peaking at #7 and being seen as her first collaboration with equal credit.

In 2017 and 2018, Rexha had a massive country-pop crossover with "Meant to Be", which features duet vocals from Florida Georgia Line. The song made Rexha the first female ever to debut a single at #1 on the country music charts.