Music / The Reign of Kindo 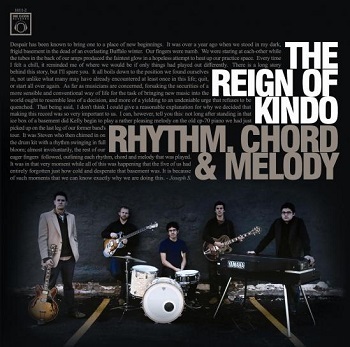 Kindo, formerly known as The Reign of Kindo, is an alternative/jazz/progressive rock band based in Buffalo, New York.

The band started out as four out of five former members of the indie band This Day & Age, after its vocalist Jeff Martin left in 2007. Joseph Secchiarolli, who originally played bass, took over as vocalist, and they recruited Jeffrey Jarvis to round out their lineup on bass. After their second album This is What Happens was released in 2010, pianist Kelly Sciandra left the band and was replaced by Danny Pizarro Jr., who first featured in the band's live studio performances of some of the aforementioned album's songs. After the release of their third album Play With Fire, guitarist Mike Carroll was replaced by John Baab as they toured to support the album. Later, percussionist Geraldo Castillo, who had collaborated with the band on several live videos, became an official member as well. After the release of their fourth full-length album Happy However After, however, the band's lineup changed significantly, now leaving Secchiarolli and Jarvis as the only remaining original members.

They have several live studio performance videos uploaded on YouTube, which can be viewed here

The band is composed of the following members:

The band and its music provides examples of the following tropes: