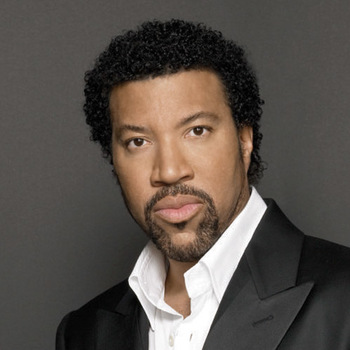 "Hello, it is me you're looking for?"
Advertisement:

Lionel Brockman Richie, Jr. (born June 20, 1949) is an American singer and songwriter, best known for his stint with the Commodores before becoming one of pop music's greatest artists. The Daily Telegraph ranked his performance at the 2015 Glastonbury Festival the number one act of the weekend.note Kanye West, the headline act of the night before finished last by comparison.

on his life and career.

In 2017, he was named as one of three judges for the 2018 ABC revival of American Idol, alongside Katy Perry and Luke Bryan. During the 58th Academy Awards, Lionel Richie won an Best Original Song

song "Say You, Say Me". Richie had another Best Original Song

Oscar nomination for the 1981 movie "Endless Love" with song of the same title.