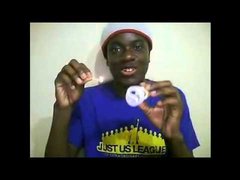 What's the worst that could happen?
"Here we go, people..."
Advertisement:

The Music Video Show is a web series created and directed by Kiara Williams (also known as The Black in Hat), involving Kiara reviewing a different music video each week or day. Since the fourth episode, she decides whether or not she would watch the video again or her thoughts on said video. It debuted on September 23rd, 2013 and ended after 10 seasons and 300 episodes. The web series can be found here