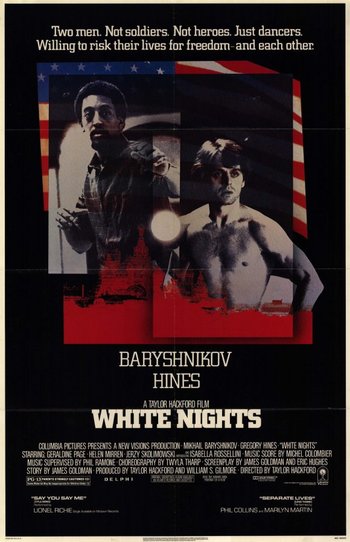 White Nights is a 1985 thriller starring Gregory Hines, Helen Mirren, Isabella Rossellini, and top Russian ballet dancer Mikhail Baryshnikov. The film is too much a thriller to be considered a musical, but it's major draws are Lionel Richie's music, and the dancing of Baryshnikov and Hines. Film critics who did not like the film, such as Roger Ebert, still thought the film was worth watching for the dance scenes alone.

Baryshnikov plays a character named Nikolai 'Kolya' Rodchenko, who was one of the Soviet Union's top ballet dancers who defected to the west. Nikolai is recaptured by the Soviet Union when his flight crashes in Siberia. There he meets an American dancer who defected to the Soviet Union, a character named Raymond Greenwood (played by Hines) who is supposed to help rehabilitate Nikolai. Soviet leaders attempt to reform and punish Nikolai for his defection. Nikolai wants to escape the Soviet Union again and seeks allies. While left together, Nikolai and Raymond dance during their dramatic dialog and exposition, expressing angst while in the midst of dangerous political intrigue.

for "Say You, Say Me" by Lionel Richie, as well as "Separate Lives" performed by Phil Collins and Marilyn Martin and written by Stephen Bishop (also nominated). The 80's

This Film is an example of: