Film / When Father Was Away on Business 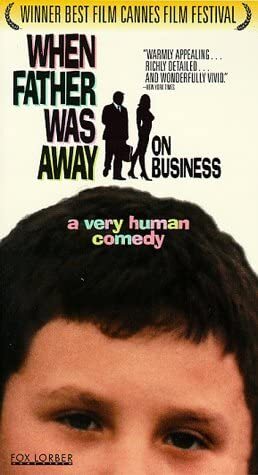 When Father Was Away on Business is a 1984 film from what was once Yugoslavia, directed by Emir Kusturica.

The film is set in Bosnia from 1950 to 1952, during a chaotic period known as the "Informbiro

" in which Yugoslavia was splitting away from the rest of the Eastern Block and pursuing an independent path. The Malkoč family is a family of Bosnian Muslims living in a rural village. Patriarch Mesa Malkoč is a Communist bureaucrat as well as a serial adulterer. Mesa gets sent to a prison camp by his own brother-in-law, Zijo. The nominal reason is because Mesa made an indiscreet comment about a political cartoon, but the real reason is because Zijo is sweet on the local school's P.E. teacher, lovely Ankica, who happens to be Mesa's mistress.

In any case Mesa is sent away to the work camp in Zvornik. His long-suffering wife Sena keeps this a secret from the kids, telling them that Mesa has gone away on business. Eventually, long-suffering Sena goes to the work camp to be with her husband, taking along their younger son Malik. All of this is told through the eyes of 8-year-old Malik, the POV character, who falls in his first puppy love in Zvornik.