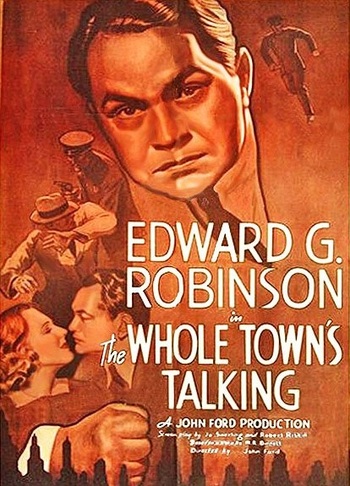 A. F. Jones (Robinson) is an unremarkable office clerk who’s got a big crush on resident bad girl, Wilhelmina Clark (Arthur). As per usual, his diffidence makes him highly uninteresting to Miss Clark until one day she finds out that he’s a dead ringer to recently escaped gangster, ‘Killer’ Mannion (also played by Robinson). Amused by this, he and Clark discuss its silliness at a local restaurant when a patron confuses him with the gangster, and has Jones falsely arrested. Once it's clear that he's not Mannion, Jones must carry a letter signed by the district attorney to avoid any further confusion.

This kerfuffle makes Jones a local celebrity, bringing the attention of a local newspaper that asks him to give his opinion about the famed murderer.

Unsurprisingly, Mannion finds out about the letter scheme, and forces Jones to hide him in his apartment and share the letter 50/50; Jones keeps it during the day while Mannion uses it at night, where he can commit crimes with impunity. Scared for his life and always the pushover, Jones submits to Mannion.

Later annoyed by the newspapers' critical look at his crimes, Mannion forces Jones to write about his escape from prison. This tips off the DA and company, since Jones is laying out details that only Mannion would’ve known. Growing suspicious herself, Miss Clark goes to Jones’ apartment, and discovers Mannion's ruse. But before she can call the police, she’s kidnapped by the gangster and his mooks.

Fooling everyone, Mannion escapes the police’s grip and sets Jones up; he tells him to deposit money in a bank, a ploy for Mannion to tip off the police, knowing Jones will be shot on the spot. Luckily for Jones, he forgets the deposit, and when he returns, Mannion’s mooks mistake him for their boss, and moronically tell him the plot against his life. No longer willing to be a pushover, Jones finally stands up for himself, and shoots down Mannion.