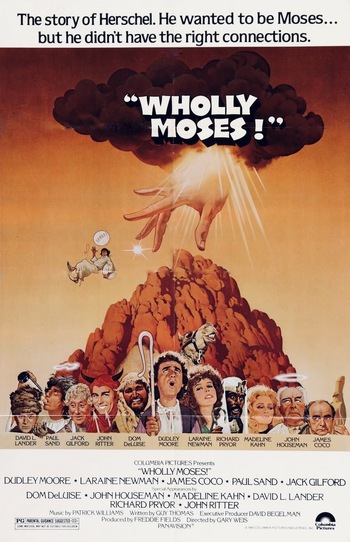 Wholly Moses! is a 1980 Biblical epic spoof directed by Gary Weis and starring Dudley Moore as Herschel, a half-brother of Moses whose life runs in comedic parallel to his more famous relative. Laraine Newman plays his ill-fated wife Zerelda, while various comedic celebrities of the era pop in for quick cameos.

The film was a shameless attempt to replicate the commercial and artistic success of the Monty Python troupe's Life of Brian, released the previous year — a task at which it is nigh-well universally considered to have utterly failed. As seen below, here on TV Tropes the film is pretty much remembered for a single short scene between Herschel and Satan, the latter played by John Ritter.