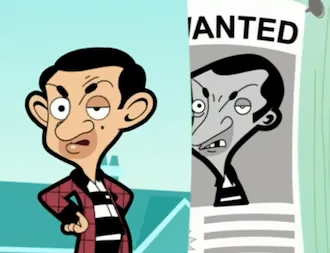 Oh man, I can't tell which one is which!
Advertisement:

A wanted criminal or escaped convict who just so happens to bear a striking resemblance to a main character and, through a number of Contrived Coincidences, invariably ends up getting confused with his counterpart.

In general, someone on the run from the police who has absolutely no ties to any of the main characters but looks like one of them is always bound to cross paths with his unwitting double, at which point the main character is often mistaken by the police for the criminal when they finally enter the picture. Occasionally, this leads to the completely innocent main character being thrown in jail in the criminal's place, without police ever looking at the main character's identification or giving him a trial to prove his innocence or even telling him what the Bewildering Punishment is for.

This regularly leads to Acting for Two, Emergency Impersonation, Swapped Roles and either Clear My Name or Clear Their Name. A Beard of Evil, irregular scar, or similar facial characteristic(s) may be employed so audiences can more easily differentiate between the original characters and their look-alikes, especially in comics and animation. When they enter the scene together, the innocent character's allies may have to resort to Spot the Imposter.

This is a subtrope of Identical Stranger; is a Sister Trope to Evil Twin (evil identical twin), Evil Doppelgänger (evil Alternate Universe persona), Evil Counterpart (evil character with a similar persona to a non-evil character), and Evil Knockoff (intentionally created evil duplicate); and is also an Undead Horse Trope.

Compare: Costume Copycat for a variation found with costumed superheroes.