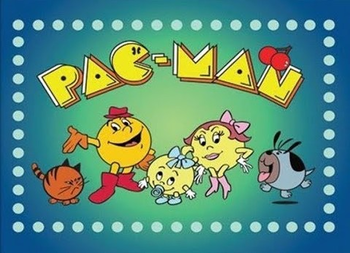 In 1982, Hanna-Barbera acquired the rights to produce a cartoon based on the eponymous game in America, as part of a 90-minute omnibus with The Little Rascals and Richie Rich. The result was the first-ever licensed adaptation of a video game character.
Advertisement:

The primary plot is about an evil wizard named Mezmaron who orders his Ghost Monsters (the four seen in the game, plus Sue from Ms. Pac-Man) to get him the Power Forest, the forest where power pellets are grown. He needs them to take over Pac-land, and maybe even more. It's Pac-Man's job to stop him.

For the CGI adaptation, see Pac-Man and the Ghostly Adventures.

Tropes from the cartoon include: