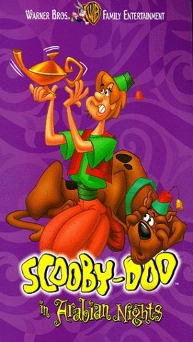 Scooby-Doo in Arabian Nights, also simply known as Arabian Nights, is a 1994 animated telefilm produced by Hanna-Barbera, yet unrecognizable as one of their own productions. Despite the film often being billed as a Scooby-Doo movie, the titular Great Dane and his human friend Shaggy scarcely appear in the movie!

The story consists of Scooby-Doo and Shaggy traveling to Arabia to be royal food tasters for a caliph. However, when they eat the caliph's entire lunch, they chicken out and hide in the Royal Harem, where Shaggy disguises himself as a young maiden and, to avoid certain doom, tells the caliph two very long stories. The first story features a knock-off of Disney's Aladdin, but with a gender reversal to the plot and featuring Yogi Bear and his sidekick Boo Boo as genies, and the second is a reimagining of Sinbad the Sailor featuring Magilla Gorilla.

This movie is noteworthy for being the final time Don Messick voiced Scooby-Doo and Boo Boo (he passed away in 1997). For all intents and purposes, it was also Casey Kasem's last time fully voicing Shaggy until What's New, Scooby-Doo? in 2002.note Kasem temporarily retired from the role after refusing to play Shaggy in a Burger King commercial due to Kasem being a vegetarian. He did voice Shaggy in the Johnny Bravo crossover episode "Bravo Dooby Doo", but that was only for a few lines. It was also the final time Allan Melvin voiced Magilla Gorilla as well as the last time Greg Burson voiced Yogi Bearnote Both have mainly been voiced by Maurice LaMarche and Billy West respectively since.

Followed by Scooby-Doo on Zombie Island (Mystery Inc.'s 1997 guest appearance on Johnny Bravo notwithstanding), which effectively relaunched the franchise. Short films, guest appearances, and cameos aside, Yogi Bear's next substantial production was his 2010 live action movie, while Magilla Gorilla is best known since from appearances on Harvey Birdman, Attorney at Law.

No, this is not an episode of "Animaniacs" you are watching.

No, this is not an episode of "Animaniacs" you are watching.