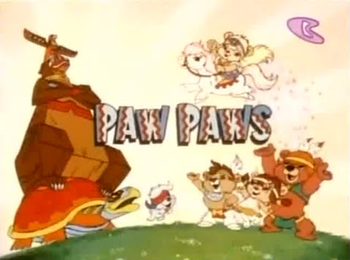 Paw Paws (refered to as such on screen despite what the theme song calls them) is a Hanna-Barbera cartoon from The '80s, shown as part of The Funtastic World of Hanna-Barbera, a syndicated weekend morning block with Yogi's Treasure Hunt and Galtar and the Golden Lance. Basically The Smurfs + Pacific Northwest Indians as anthropomorphic bears, with their totem doubling as a sort of Combining Mecha.