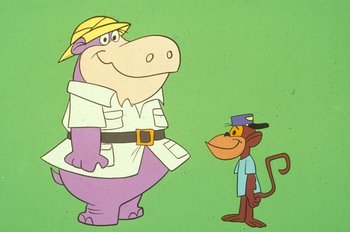 Peter Potamus is one of several Hanna-Barbera Funny Animal characters created during the 1950s-1960s Three Shorts period to have his own show. A purple hippopotamus, he's a Half-Dressed Cartoon Animal clad in a yellow pith helmet and a white safari jacket cinched with a belt. Accompanied by his monkey sidekick So-So, Peter explores the world in a time traveling hot air balloon, encountering all sorts of far-fetched and fascinating adventures. Whenever he gets in trouble (as seemingly happens once each episode), Peter uses his devastating "Hippo Hurricane Howler" to blow away his enemies. Daws Butler voiced Peter (using the same Joe E. Brown style voice employed for Lippy the Lion), while the actor who portrayed So-So was Don Messick.

The Peter Potamus Shownote note that the title card for each episode read Peter Potamus and So-So consisted of three segments. Peter's entry was followed by ones for Breezly and Sneezly and Yippee, Yappee and Yahooey.

Peter proved more resilient than many other characters of this type. He was a recurring fixture in Harvey Birdman, Attorney at Law, atypically portrayed as a lazy and disreputable (but highly accomplished) lawyer and serial womanizer. The purple hippo also appeared on Yogi's Ark Lark, Yogi's Gang, Yogi's Treasure Hunt, Laff-A-Lympics, and The Good, the Bad, and Huckleberry Hound, among others. Like many of his fellow H-B characters, he's also part of Jellystone!, now an Occidental Otaku, of all things.