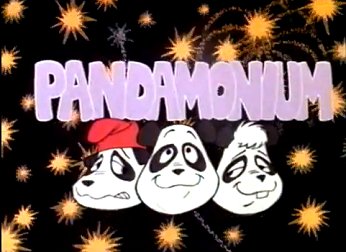 A short-lived Metro-Goldwyn-Mayer/Marvel Productions animated series that ran on CBS between 1982-83.

A purple cloak-wearing alien sorcerer called Mondraggor attempts to steal The Pyramid of Power, a powerful and ancient artifact. The Pyramid shattered, and the pieces fell to Earth. Two humans, Peter Darrow and his sister Peggy, observe the falling pyramid pieces. When they go to China in order to locate some of the pieces, they encounter three talking Pandas: Chesty, Timothy, and Algernon, who were given power by some of the Pyramid pieces. The three could magically merge into Poppapanda in order to use supernatural powers. The humans and the Pandas team up to stop Mondraggor from assembling the pieces of the Pyramid.