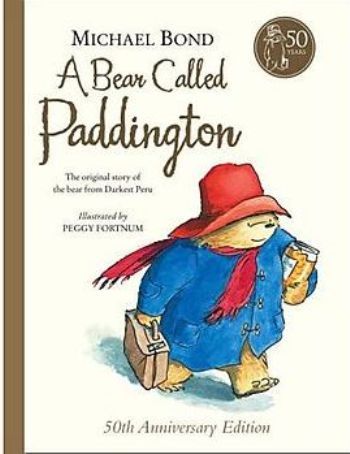 A reprint of A Bear Called Paddington, the first book in the series.
"Please Look After This Bear. Thank You."
Advertisement:

A series of books first appearing in 1958, written by Michael Bond, about the antics of a small anthropomorphic brown bear who lives with an ordinary London family. Paddington is usually seen wearing a blue duffel coat (a somewhat old-fashioned warm coat fastened by toggles) and rather shapeless black hat (though more modern versions sometimes give him a red hat instead, or even reverse the colours for a blue hat and red coat).

Paddington books continued to be written throughout the 1960s and 1970s, and spawned a TV series of 5 minute shorts that ran from 1975 to 1986. The unique visual style (Paddington himself is a stop-motion figure, the backgrounds are black-and-white line drawings and the other characters are 2D paper cutouts) and catchy theme tune led to it becoming a well-loved childhood favourite. Another more traditional animated series ran from 1997 to 2000 under the name The Adventures of Paddington Bear.

A live-action movie was released in December of 2014, with Nicole Kidman, Sally Hawkins, Hugh Bonneville, Jim Broadbent, Peter Capaldi, and Ben Whishaw as the voice of Paddington. A sequel was released late 2017 with Hugh Grant and Brendan Gleeson joining the cast.

Paddington's creator Michael Bond passed away in June 2017 to universal sorrow from the British public.