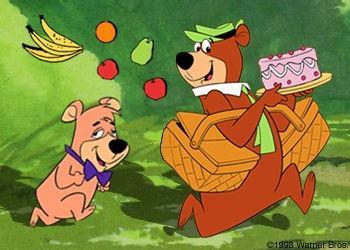 Originally a supporting character on The Huckleberry Hound Show, Yogi Bear was one of the most popular early Hanna-Barbera characters.

Yogi and Boo-Boo Bear live in Jellystone National Park. Wise-cracking, gluttonous, and "smarter than the average bear", Yogi would come up with all sorts of schemes to steal the "pic-a-nic baskets" of those visiting the park, and hilarity would ensue every time. Boo-Boo would often warn Yogi that "the ranger isn't going to like this". Indeed, Yogi would invariably be scolded by Jellystone's Ranger Smith, who does his best—but always fails—to keep Yogi in line.

The character’s name was based on New York Yankees baseball player Lawrence Peter "Yogi" Berra, and modeled to an extent after Art Carney in voice and character. He was popular enough to headline his own series in 1961. Supporting segments on The Yogi Bear Show featured Snagglepuss and Yakky Doodle. In 1964, Hanna-Barbera released its first animated feature, Hey There, It's Yogi Bear!, through Columbia Pictures. In the 1970s and 1980s, Yogi and his contemporaries appeared in several Crossover series. There were also a few prime-time specials, the best-remembered of which is probably the TV movie Yogi's First Christmas.

Daws Butler served as the voice of Yogi for the first 30 years of the character's existence, while Boo-Boo and Ranger Smith were normally played by Don Messick during that period.

Let's take a look at what tropes they've got on this web-a-site!