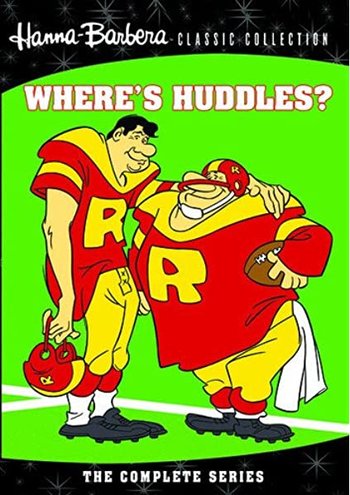 Where’s Huddles? was a Hanna-Barbera animated sports sitcom which premiered on CBS on July 1, 1970 and ran for ten episodes as a prime-time summer replacement show for The Glen Campbell Goodtime Hour until September 2, 1970. Repeats were shown on the network’s Sunday afternoon schedule in the summer of 1971. It was the first primetime animated series to debut since The Flintstones went off the air in 1966, though it wouldn't be until The Simpsons premiered in 1989 that primetime animated shows would be popular again.

The show centered on professional football quarterback named Ed Huddles (voiced by Cliff Norton) and his neighbor, the team’s center Bubba McCoy (voiced by Mel Blanc, using his Barney Rubble voice), who play for The Rhinos and go through the trials and tribulations of being sports stars and family men.

Other characters included Ed's wife, Marge (voiced by Jean Vander Pyl, the same voice actress who played Wilma Flintstone), their rather jovial, if acerbic and most likely Camp Gay, neighbor Claude Pertwee (voiced by Paul Lynde) who tended to refer to Ed and Bubba as "savages," loved to see them screw up, and had a pet cat named Beverly; their token black teammate Freight Train (voiced by Herb Jeffries), Ed's daughter Pom-Pom and Coach Mad Dog Maloney (Alan Reed using his Fred Flintstone voice). Bubba’s wife, Penny McCoy, was played by comedic actress Marie Wilson in her final role before her death from cancer in 1972.

The show was similar to Hanna-Barbera's more successful series The Flintstonesnote in very much the same way that Seth MacFarlane's Family Guy, The Cleveland Show, and American Dad! are all alike, using several of the same style plots and voice actors (Alan Reed, Mel Blanc, and Jean Van Der Pyl being the main three). Like The Flintstones, and unlike many other animated series at the time, Where’s Huddles? had a laugh track, incorporated more adult themes and references than The Flintstones did while simultaneously keeping it family-friendlynote compare with the next primetime Hanna-Barbera cartoon, Wait Till Your Father Gets Home, which didn't tone down its adult themes and was made to be a cartoon for older audiences first, had the voice actors in a more realistic fashion as compared to say a funny animal style speech. The show is also notable for the character, Freight Train, being the first regularly-seen African-American animated character on primetime.

The show isn't remembered much today, unless you either watched it when it premiered or back when Cartoon Network aired more of the Hanna-Barbera catalog (including turns for minor shows along with the more well-known stuff, like The Flintstones and Scooby-Doo). As later confirmed, these CN airings did have some parts cut from each episode. Upon the series 2016 DVD release, this footage not seen since the 1970s is once again included.