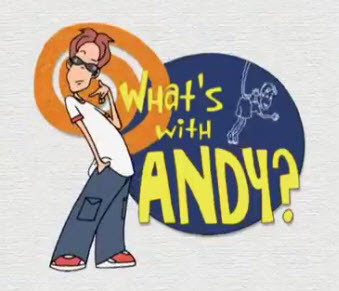 What's with Andy? is a Canadian animated series from the Montreal-based animation studio CinéGroupe and loosely based on the semi-autobiographical Just...! series of children's books by Australian author Andy Griffiths.

The show is about Andy Larkin, a teenage boy from the small town of East Gackle in some flyover region of midwest USAnote Alberta, Canada in Seasons 2 and 3. East Gackle would frankly be a very dull place were it not for Andy himself, as Andy strives to become the greatest prankster in the world. Always seeking to outdo himself, Andy, with the help of his best bud and right-hand man Danny Pickett, constantly works on any new and elaborate pranks he has in mind, each one more spectacular and outrageous than the last. None are safe from Andy's love of mischief, not his friends, not his family (especially not his irritable older sister Jen), not his school, and not even the whole town.

And while Andy is in some ways a total terror to his boring little town and its staid and apathetic citizens, Andy still has his share of troubles, especially when it comes to impressing his crush Lori Mackney, who views his pranking obsession as immature, and the results of his various schemes are just as varied as the pranks themselves. But regardless of how successful he is or what kind of practical joke he has in mind that day, it can be guaranteed that everyone will be shouting out the show's title as Andy Larkin turns the lives of everyone around him upside down with his bottomless talent for trickery.

The series debuted on Teletoon on June 30, 2001 and ran for 3 seasons and a grand total of 78 episodes, with the final one airing on March 4, 2007. In the States, the show originally aired on ABC Family, but moved over to Toon Disney for the second season. Notably, the American Channel Hop coincided with two major changes to the show, with the first season using American Voice Actors and being set in the United States but the next two seasons moving both the setting and voice acting to Canada.