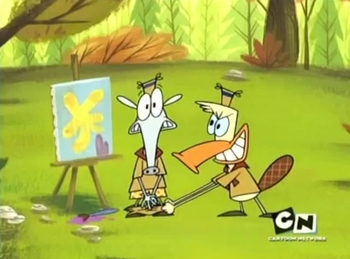 Since when is underwear more embarrassing than walking around pantless?
One of many Practical Joke tropes, this one involves pulling someone's pants down to expose their underpants (also known as "pantsing"). Usually from behind. And it may or may not take the underwear down with it. The pantsed character usually has a Naked Freak-Out once noticing and fumbles to either cover himself or to pull their pants back on.

A little something for future reference: this is a prank that can lead to accusations of sexual harassment and/or indecent exposure, so be careful who you do it to.

Can double with Comedic Underwear Exposure, though this usually involves just the pants coming off. Compare with Shameful Strip, Stripping Snag and Wedgie.