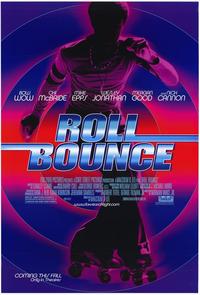 "Bounce! Rooooooooock, Skate! Rooooooooll, Bounce!"
"X": "...All this fallin' stuff, it's just not cool."
Benard: "Hey, you don't fall... how you gonna know what gettin' up is like?"
Advertisement:

Roll Bounce is a 2005 coming of age dramedy set around the urban roller-skating scene of The '70s.

In the summer of 1978, Chicago native Xavier "X" Smith and his friends have one common passion: roller skating. When their usual South Side haunt The Palisades Gardens closes its doors for good, they venture to the upscale Sweetwater Roller Rink on the city's North Side. There, they run afoul of the resident skate crew, the Sweetwater Rollers, and their leader, local lothario Sweetness. At the same time, X and his father Curtis grow more distant from each other, as neither has really gotten over the passing of Kathy, Curtis' wife and the mother of X and his little sister Sonya. Alongside new friend Tori, one-time date Naomi and his loyal crew, X prepares for the upcoming Sweetwater Skate-Off, with a $500 prize and more than one ego on the line.

Staring Bow-Wow, Chi McBride, Jurnee Smollett, Wesley Jonathan, Meagan Good, and featuring Mike Epps, Charlie Murphy and Nick Cannon, the film has mostly positive reviews behind it, although it didn't exactly set the box office on fire. Most of its fans praise the skating talent on display, the feel-good humor, and the groove-heavy soundtrack.