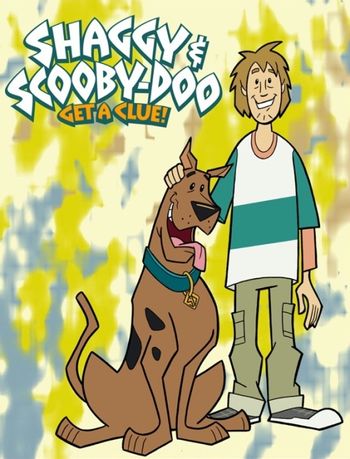 This isn't your parents' Scooby-Doo.
Velma: It sure sounds like you guys have what it takes.
Daphne: I think you two have really grown up.
Waiter: Enjoy the food.
(Shaggy and Scooby devour everything in front of them)
Fred: Then again, they're still the same old Shag and Scooby.
Scooby: Scooby-doo-be-DOO!

Shaggy and Scooby Doo, the Lovable Coward/Big Eater duo from the Scooby-Doo franchise, branch out in their own show, where Shaggy inherits a billion dollars and a mansion from his missing Uncle Albert, an inventor. However, Uncle Albert's inventions are being pursued by the sinister Dr. Phineas Phibes and his henchmen. Fortunately, Shaggy and Scooby can thwart their evil plans thanks to special Scooby Snacks that give Scooby-Doo temporary superpowers. It didn't get any further beyond two seasons, because of the CW shutting down the Kids' WB! block after 4Kids Entertainment bought it.

Tropes of this series: