Western Animation / Alvin and the Chipmunks Meet the Wolfman 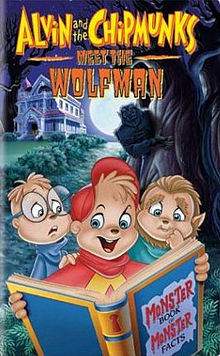 The second one came out in 2000, an animated horror-themed film entitled Alvin and the Chipmunks Meet the Wolfman. Like the previous direct-to-video, it was produced by Universal Animation Studios, animated by Tama Productions, and distributed by Universal Studios Home Entertainment.

Alvin thinks of himself as an expert on spooky stuff such as vampires and werewolves, so when a mysterious stranger moves in next door, Alvin's convinced the new neighbor's a werewolf. Then, when Theodore gets bitten by a "dog", he starts chewing socks, eating meaty stuff, and is a lot faster, even Simon thinks something's not right. But at the moment, he is more like a werepuppy. They now have to find a way to cure him before the next full moon, during the school play, Dr. Jekyll and Mr. Hyde, or else Theodore will become a werewolf forever!

NOTE: Tropes under here are specifically for the 2000 Direct to Video movie.