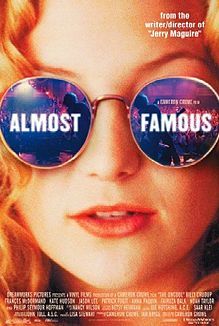 William: What do you love about music?
Russell: To begin with... Everything.
Advertisement:

Almost Famous is a 2000 coming-of-age film directed by Cameron Crowe, loosely based on Crowe's own teenage years as a music critic.

Set in The '70s, the film follows the experiences of Author Avatar William Miller (Patrick Fugit), an aspiring teenage rock journalist who gets sucked headfirst into the world of rock when he goes on tour with a band named "Stillwater". In addition to the band itself, he becomes acquainted with its groupies and gets a good look at what happens underneath the glamorous exterior that most people are presented with.

"Tiny Dancer" goes from being played in the background to being sung by those on the bus.

"Tiny Dancer" goes from being played in the background to being sung by those on the bus.